Slashing tires is a felony if the damages are worth $1000 or above. Charges on slashing tires are usually determined by the level of damages incurred by the actions.

This includes the number of tires slashed, the cost of the tires, and the estimated worth of the damages. On some occasions, slashing tires might not be considered a felony.

The value of the slashed tires determines if it is just misdemeanor, vandalism, or felony.

If the slashed tires are worth a few hundred dollars, it is not a felony. But tire slashing damages of above $1000 is a felony; an action punishable by the law.

Is slashing 4 tires a felony? 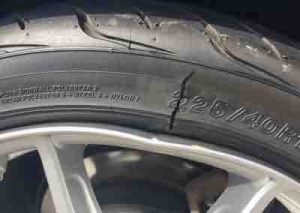 Medium tires of sixteen – twenty inches worth as high as $250 per tire in the USA. Slashing four tires places a bill of $1000 on your shoulders. This is enough to charge you for a felony.

There are a lot of factors that determine the level of crime to attribute slashing tires. Some judges take into account the safety of the driver riding on the slashed tire. This helps them determine the best judgment to give.

For instance; you slashed four tires of a driver and unknowingly they hit the road on four slashed tires. The law can go as against as such action jeopardizes the safety of the driver.

In this case, you didn’t just slash a tire, but your actions threatened their life.

Just as you know, actions of slashing tires are born out of a place of hate. It will take a lot of pleading and convincing to make the court understand that your actions were not a direct attack on the victim’s life.

However, in a general case, slashing four tires is a felony if the four tires are worth $1000 or above.

Is slashing 3 tires a felony?

It is difficult to classify slashing 3 tires as a felony. There is a high probability that the cost of the three tires will not get up to $1000.

However, there are chances that the 2 slashed tires are high-end tires. High-end tires which are also known as ultra-high performance tires come with the price of $300 – $1000.

Slashing three high-end tires is a felony. The value of the three tires can run from $1000 to as high as $3000. The Value of the slashed is a major determining factor to its crime classification.

Slashing three tires is a criminal offense, but in some cases, it becomes a misdemeanor instead of a felony. If the value of the tires drops below $1000, then it’s a misdemeanor and not a felony.

Slashing three tires can get you probation, or an imposition to pay for the tires. The possibility that you will go to jail depends on the value of the tires and also if you have a criminal record.

Arguments around slashing tires being a felony?

Slashing tires is an act of destroying someone’s property. However, different factors will determine how the laws will interpret property damage.

What will make the law classify slashing tires as a felony?

There is a thin line between misdemeanor and felony. A lot of times, most people caught slashing tires fail to understand the differences in the weight of their crimes and they end up serving jail terms for Felony.

Here are certain factors that might make the law consider slashing tires as a Felony.

The first factor that comes into consideration that might classify slashing tires as a felony is the cost of the tires.

The value of damages accrued during the tire slashing plays a great role in determining if it is a felony.

For instance; if a car runs on $150 tires, and you slash four of those tires, it is a felony because the total cost of the tires ain’t up to $1000.

But in a different scenario, if you slash high-end tires and the value and cost of the tires run up to $1000, your actions are a felony.

The number of tires slashed does not matter but the cost and value of those tires do. If you slash four $100 tires, the cost is $400 so it will not pass as a felony.

But if you slash three $350 tires, the cost of the tires is $1050, it becomes a felony. The cost of damages greatly determines if it will pass as a felony or not.

2. Condition of the vehicle and victim

Things might get messy with a “little” act of slashing tires. You might not only get charged for a felony but you might get imprisoned for manslaughter, attempted murder, assault, homicide.

What will make the law see slashing tires as a heavy crime?

Certain unforeseen factors come to play in cases of slashing tires. One of these factors is the status of the vehicle owner or victim after you slashed their tires.

For instance; You slashed tires and the victim ignorantly took the car for a ride. If an accident happens in this event, the victim can press a case as a felony, attempted murder, assault, or homicide.

Riding on slashed tires can not only damage your tire’s wheels but will affect the control and balance of the car.

If the wheels of the car got damaged during the slash, the overall cost of the tires and wheels will shoot above $1000. This will attract a felony act.

What are other criminal charges which could result from slashing tires?

Slashing tires which is an act of destruction of personal property is a criminal act.

Criminal Mischief usually stands as the general name for all criminal acts that fall under the destruction of properties. The definition of criminal mischief differs for a lot of countries.

The classification of the different degrees of criminal mischief depends on the value of the damaged property. In the case of tires, tires slashing that are less than $100 are class C criminal mischief.

Slashing tires with a value that ranges between greater than or equal to $100 and less than $750 is Class B criminal mischief.

Circumstances like slashing tires can become vandalism. Vandalism usually refers to the act of intentional destruction of someone’s property.

It also includes the act of inflicting damages on a property, in such a way that the damage reduces the value of the property. Slashing tires can fall into this category.

This is because slashing tires is a willful act of destruction. Certain elements decide if a crime will pass as vandalism.

If slashing tires is not done ignorantly, it will pass as vandalism. Slashing tires is a premeditated action that stems from a cause. In some cases, people slash tires in revenge, to cause harm, or for some other petty reasons.

An employee can decide to slash his boss’ tire after a disagreement. As long as the action was willful, inflicted physical damage and on a property owned by someone else, tire slashing becomes an act of vandalism.

A misdemeanor is usually placed side by side with criminal mischief. While these two might be the same in some states, it doesn’t eliminate the fact that a misdemeanor is a lesser crime than a felony.

I’ll prefer getting filed for a misdemeanor than having a felony suit hanging on my head.

Slashing tires are a misdemeanor if the value of the damage is less than $1000. For instance, if someone slashed two tires, but the value and overall cost of replacement of both tires are not up to $1000, then it will pass as a misdemeanor.

The thin line between having a case of slashed tires filed as a misdemeanor or felony is in the overall cost of replacement and the value of the damage.

However, in some states, the agreed cost to decide if a case is a misdemeanor might go higher or lower than $1000.

The cost of replacement is the primary area of concern to decide if the slashed tire should pass as a misdemeanor or not.

If the slashed tire didn’t cause any additional damage on the car or to the rider, it remains a misdemeanor and not a felony.

What does the law say about slashing tires?

These factors that decide what slashed tires law says about slashing tires include:

The location and laws of the state

There are different laws on slashing tires according to the location and laws of the state.

For Minnesota, slashing tires which are ruled as criminal property damage has a jail term of five years or a fine of $10,000 or even both. This is if the action passes as first-degree damage.

This law is not the same in other states and locations. For instance, In Canada, slashing tires that fall into the category of a misdemeanor has a jail term of six months and a fine of up to $1000.

The degree of damage

The degree of damage plays a great role in what the slashing tire law will have to say on the issue. First-degree and second-degree damages do not get the same legal rulings.

If the damages increase to a felony, the law wouldn’t play as lenient as it would if it was just an act of criminal mischief. The degree of damage on slashing tires is usually determined by the value of the damaged tires.

Agreement of both parties involved

This might sound trivial, both the ruling of the law on slashing tires also depends on what the parties involved decide. Some slashing tire cases usually pass as disagreement.

To avoid a prolonged case, the parties involved might decide to settle the matter out of court.

All that they have to do is to ensure that the person that slashed the tires replaces the damaged tires. This usually serves as a fair treatment to slashed tires.