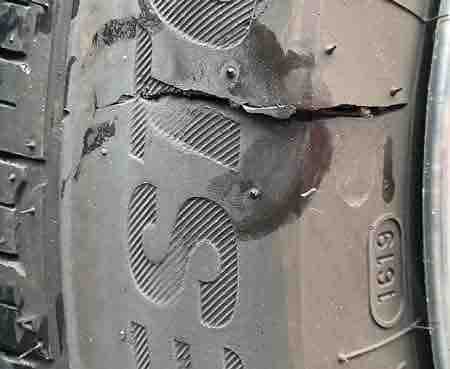 Why would someone slash my car tires? This is a question that has become a puzzle to every car user or driver over the years. Whatever the reason, it is tiring and annoying when your tires get slashed, and will also cost you a lot to get your tires replaced.

If it happens constantly, you will end up getting new tires every now and then leaving you in a state of frustration.

If someone slashed your tires, it could be that they are jealous of you. People get jealous of people who have nice things they don’t have like a new car and house or even a new job. Jealousy is the root of hatred they say.

When a person has a hatred for you, such person will go any length to see you sad and frustrated, and slashing your tires is one way they can get to you.

Sometimes, you cannot understand why a person is being mean to you, of course, it’s jealousy, you might not notice that neighbor next door just got the exact type of car you are riding, that’s it!

Someone envious of you will always try to mimic every single thing you do, we call them “copycats”, it could be flattering at first, but it’s something you should be worried about, the best thing you can do in such a situation is to watch closely.

Obsession is one thing that can make someone go as far as slashing your tires. They are obsessed with what you have and because they don’t have it they would want to destroy yours. For them, it’s a game of “who has the best”.

Simply just expect this kind of people to annoy you. They want to downplay your achievements down the drain. Yes! Jealousy is a poison that destroys anything – your car tires.

One reason someone might end up slashing your tires is to take revenge on you for something they feel you have done to them in the past so they are taking their anger out on you in a very personal way to try and hurt you.

Revenge is a strong emotion and has been a part of human behavior. This emotion prepares people into actions, especially taking actions without considering the effects.

All the person wants to do is to cause you harm and make you feel pain for a while. Remember the old talion law? “an eye for an eye, a tooth for a tooth” vengeful people tend to follow this law.

We completely get the idea of wanting to hurt those who hurt us, however, what prevents us from retaliating is impulse control, our core values, emotional regulation, and ethical principles, without these traits, we’re just animals in a jungle.

But, this is life and we are all different people, do not feel everyone should act and behave the way you do.

Not everyone has that control and the spirit of forgiveness, they believe in serving you in your own coin; some serve their revenge cold, others do it in a haste – they immediately seek any means to avenge their anger, and slash your car tires is one of those means.

You do not have to wander too much, a person can randomly slash your tires for fun or out of boredom. This act is most times done by children in the neighborhood especially when they have nothing doing and have no one to keep watch.

These kids will randomly go to the garage and slash tires. Will boredom make one do stupid things? Well, it’s just so unfortunate and disrespectful, maybe it could be sport-related or from an assessment in school but making damages to one’s car is not the right thing to do and it’s totally uncalled for.

There are several ways to kill boredom, slashing people’s car tires is not one of them.

You might not believe kids or just anyone would do something this ridiculous. Kids often do the weirdest things that are both surprising and confusing, things we can’t give answers to.

You probably have done your share of crazy when you were a kid so dead the thoughts that kids are all pack of trouble, we simply can’t deny the fact that they are a great source of amusing entertainment but when no one is watching they come up with the most shocking news, getting your tires slashed could be the highlight.

A means to send a message

This could be a reason why someone must have slashed your car tires. Sometimes it’s not as scary as you think it is. It’s not always the neighbor next door or that friend you hold grudges with.

There is a possible reason that someone who knows you very well is trying to send you a message, maybe they wanted to let you know they are thinking of you, say, your loved one, or an ex-girlfriend or boyfriend.

But whatever the motive is, it is very frustrating when you’re about stepping out and then there are your tires slashed. Your tires may be old and need to be replaced anyway, in which case, they slash your tires to make a point.

We’re still on whether the person is trying to send a message, now think about your boss or coworker you just disagreed with the previous day. What if he is trying to let you know he won’t let you get away with it or maybe he’s trying to inform you there’s danger ahead.

This could be quite alarming! You should be very careful when such an incident occurs and that is why it is advisable to invest in an alarm system, this will serve as an alert as to when anyone tried to cut your tires.

It could be someone is angry at you for some reason and sometimes for no reason at all, people can be that way.

You possibly can’t control how people feel and how they react to things or generally the things they do, someone who is mad at you might decide to slash your car tires.

It could be a friend, a neighbor or an enemy who Hayes you and wants to make your life difficult. The motive is always to serve you pain. Anger as a feeling can make one cleaver or stupid and slashing one’s tires is actually a stupid thing to do.

Psychology studies show that people process less information and harshly judge others when they are angry and this is one main cause they end up doing things that are not rational.

Maybe you once ended up upsetting that person and instead of addressing the issue, they let anger gets the best of them. Unfortunately, anger makes one do dumb things like slashing a tire.

Another reason someone might be slashing your tires is to steal something from your car.

The motive behind this is that they want it to be obvious that they only came for your tires but really they just want to take a random thing in your vehicle and you might not notice for a very long time except for the slashed tires.

Sometimes people see them when they’re in the act of slashing your tires and then call the police, this will give them time to go through your car and take what they actually came for.

Someone might slash your tires if they want to break into an area like an office building, but not sure of the kind of security system there is in place.

They will slash some of the tires in the parking space outside the building for distraction purposes then sneak in through another entrance to break into the building.

A person will intentionally slash your car tires because of something you have done either directly at them or to a friend of theirs.

The right thing to do is for them to walk up to you and pour out their hearts, if everyone can act this way, the world will be a better place but no, people can be cruel.

They prefer to just cause you pain rather than tell you what you did. Sometimes, they will make it known to you and make you apologize but they will end up being the bad guy.

Your car must have been mistaken for another

This can also be a reason why your tires have been slashed – it could be a case of mistaken identity. They might be mad at someone who drives the same car as you then ended up slashing your car tires.

This kind of incident happens and sometimes you might get lucky if the person comes back to pay for the damage but most of the time you will never hear from them leaving you frustrating and wondering who would have tampered with your tires.

To get your attention

People do different things for various reasons like slashing a tire to get one’s attention. A person might have slashed your tires to get your attention because they feel they are not being noticed by you.

It’s actually an irrational thing to do, say, for example, they intend to be friends with you but do not have the courage to talk to you, they might take the action to slash your tires and watch from a distance, that way when you step in your car to go out only to see your tires slashed.

They’ll come out from their hiding place and act like every random person would – ask what happened. That’s it!

Their motive is for you to seek help from them and actually talk to them but still, that doesn’t justify the fact that your tires got ruined and it’s gonna cost you to get a new set of tires.

A person who is mentally ill can’t feel empathy, such a person lacks emotion and does not care if their actions affect other people. They are more likely to cause damage to one’s property or even one’s life than most members of society.

Other possible reasons include:

From this article, you’d notice that most of the reasons why someone would slash your car tires are personal, while others seem not to be.

The motive behind someone slashing your tires is to prevent you from using your car and also to cause you financial loss.

The most obvious reason is that they hate you and they want to make life difficult for you.

Make sure you park your car in a well-lit area with security cameras so that when such an incident occurs, it can be easily made known to you. Just be careful out there though!

What To Do If Someone Slashed Your Tires

Below are some things to do when you notice that your tires have been slashed: