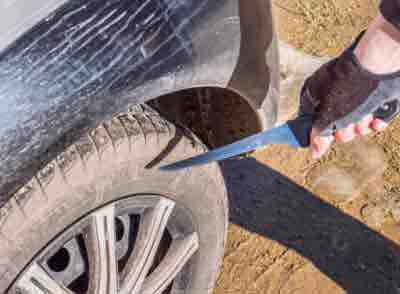 We have a lot of news and stories on the web about slashed tires. You might have been in a situation like this and it is worthy to ask for the consequences of slashing a tire.

Can you get sued for slashing tires? Can you slash tires? It is normal for you to have the urge to slash the tires of your angry boss that has refused to hand over your paycheck. He deserves a taste of violence, your brain screams.

Destroying an individual’s personal property is a crime punishable by the law. This makes it illegal to slash tires. However, in some instances, we will find policemen slashing tires during protests.

You might need to slash the tires of a suspected criminal following your trail. Law enforcement agencies reserve the right to slash tires packed at the wrong locations.

In these scenarios, the law might not tag it illegal to slash tires, because the actions have a justifiable cause.

More importantly, the number of tires slashed also plays a great role to determine the illegality of the grave of the crime.

How is it illegal to slash tires?

But why should you get sued for slashing tires? The truth remains, in most countries, slashing tires are crimes that are worthy of penalties.

For instance; laws in Minnesota see slashing of tires as an illegal offense with a jail term ranging from ninety days to twelve months.

The circumstances surrounding the illegality of slashing tires border around the fact that you just damaged someone’s property.

The gravity of the crime might bear so much weight if the judge or anyone pressing the case decides to aggravate the circumstances.

The law court might assume that you slashed a person’s tire to stall them for greater harm.

It is also possible to pass a verdict that you slashed their tires and knowing that ignorantly riding on slashed tires might result in an accident, you just posed a threat to their life.

The weight of the illegality is also weighed according to the number of damages you inflicted on the victim.

What happens if you get caught slashing tires?

There are a lot of things that might happen to you if you get caught slashing tires. Slashing a tire’s consequences greatly depends on the circumstances surrounding the event.

The intent of action plays a great role in deciding the verdict passed on you.

However, here are six consequences for slashing tires.

Different courts in different states have different payments to damages tied to slashing tires. The court determines the fine, surcharge according to the laws of the state and the gravity of your actions.

As a payback to your ex, you decided to slash her tires. Although she had it coming, the court will penalize you for doing so.

The California law sees the slashing of tires as the destruction of property, which can equate to vandalism, misdemeanor, or felony.

The fine for slashing tires rises to $1000 or a maximum fine of up to $5000 if you have a previous case of vandalism.

The fines can rise as high as $10,000 if the degree of damages is huge. According to California laws, damages above $400 can attract $10,000. You have a lot to lose for slashing a few tires.

This might sound like an overblown consequence of slashing tires. But, yeah! You can serve a jail term for slashing tires. The weight of the crime and damages decides the years of imprisonment.

In California, damages of over $400 amount to a three years jail term. Damages below $400 can attract one-year imprisonment in county jail. Don’t get surprised if the court convicts you of a felony, just for slashing someone’s tires.

In some cases, the victim, complaint, and court could play lenience to your case.

Even though they could pay heavily for slashing tires, they can decide to pass a verdict that mandates you to replace those tires.

This might sound like a mild sentence, but replacing the tires of a four-wheeled car will have you spending some tons of dollars that you should use for some other things.

4. Suspension of your driver’s license

In some cases, slashing tires is an act of misconduct, a character flaw that a driver shouldn’t possess.

To prevent further occurrence, the court reserves the right to suspend your driver’s license for up to two years. This law is applicable in California. This is achievable if the tire damages are below or above $400.

The law considers you of questionable character if you get caught slashing tires. To ensure that such things don’t happen again, the court can put you on probation to ensure that you are on good behavior.

The truth remains, slashing tires don’t happen randomly. These actions don’t happen all of a sudden. It goes through premeditation, calculation and is carefully executed.

You start by choosing the perfect spot to strike the tire and selecting the best equipment that will penetrate the tires of your victim.

To ensure that the court does not release a time bomb to society, it is essential to place you on probation till the court clears you of all ills.

It is justifiable to combine other correctional measures and practices to ensure that you do not slash someone’s tires again.

This may include counseling, community service, etc. The goal is to make sure that you have a change of heart and nothing will trigger such actions again in the future.

Can you get charged for slashing tires?

Yes, you can. The law of most countries grants the court the authority to convict and charge you for slashing tires. As you know already, slashing tires is property damage.

While numerous circumstances may surround your actions, naturally you will be charged for slashing tires. You can only employ a good lawyer to apply some defense tactics to plead leniency or a total dismissal of the case.

This includes ensuring that the case of slashing tires and the damages accrued weren’t exaggerated. You can seek a civil compromise that will allow the victim and the offender to settle out of court.

This will grant you the grace to only replace the tires. You will have a successful defense if you can convince the court that your reason for slashing tires wasn’t a threat to life. It can pass as a self-defense mechanism.

Slashed tires what to do?

What do you do when your tires are slashed? Sit and cry out your eyes? That is the funniest response you should give in this case. Nevertheless, you already have slashed tires, so what should you do?

Here are two things you should do if you notice slashed tires.

Contacting the police is the first thing that you should do when you notice slashed tires. There are chances that the person that slashed your tires will come back for the second round of your flesh.

Informing the police gives you some legal coverage on the case. The Police can station its officers around the area where you park your car.

This will make it easy to apprehend the culprit. As additional support, the police will carry out an investigation based on your report.

They must analyze the weight of the tire slashing. Joining the misaligned dots will help them decide if this was just a minor case of a threat to life.

There are a lot of things that cause tire slashing; vandalism, riot, revenge, or a self-inflicted slash. It is possible that you accidentally rode your car on a sharp object that slashed your tires. The police must verify your claims.

Contacting your insurance company gives you leverage while the court or law enforcement agencies are working on apprehending the culprit.

The insurance company can bear the costs of replacing the slashed tires.

In most cases, the insurance company can also help you press charges and enforce the full extent of the law to ensure punishment on the defaulter.

However, in some other cases, the insurance company might not cover the entire expenses to get a brand new tire. But the insurance can help you get your cars running again.

How to prevent your tire from being slashed

It doesn’t stop at hearing multiple cases of slashed tires, you have to learn how to prevent your tire from being slashed.

Here are ways to prevent your tire from being slashed.

1. Stay away from riot areas

There is an angry mob approaching with anger, probably protesting about unpaid salaries, bad governance, racism, or brutality as the case usually is.

Their emotions are at their peak, there are high tendencies that the walk might turn violent after a protest hijack or heightening of burning feelings.

You might not only end up having slashed tires, but they might also go as far as breaking the windows of your car.

A surveillance system will not only help you know who is responsible for slashing your tire, but it will always scare away anyone with such thoughts.

With a set of security cameras in your house or office pointing towards the direction of your car, anybody intending to slash your tires will think twice without carrying out such acts.

It becomes crystal clear that their identity is not hidden, so they have to rethink their plans.

Most individuals that slash people’s cars do so in such a way that you will not figure out who did this. With a properly mounted surveillance system, they will think twice before carrying out such tasks.

Most of the cases of slashing people’s tires are because they parked their cars in the wrong places. Some police officers might employ some less legal practices to punish defaulters.

At the end of the long argument, you might not press charges or win the case because you were also going against the law.

To prevent your tires from being slashed, stay away from areas that have a higher probability of getting a slashed tire.

4. Train your neighbors to learn how to look out for each other

Having a watch party is a good way to go. This will not only send out word that you guys have a sensitive vigilante system, but it will also build the spirit of community support.

Everyone can look for each other. If they spot strange movements around anyone’s car, they can alert the neighborhood or confront the defaulter before things go south.

However, if you spot someone trying to slash a tire, it is necessary to approach the case with caution.

Tires are slashed with sharp and harmful objects. With the level of pain and anger in the mind of the defaulter, there are chances that they might transfer the aggression to you.

Instead of trying to become the superhero of the day, you can call the police, take pictures as evidence, or record a video. This will prevent any future case of tire slashing in the neighborhood.