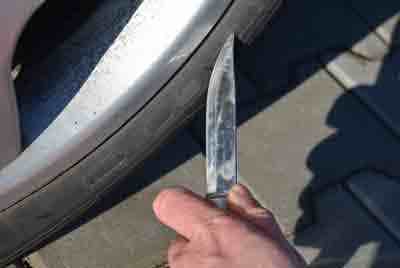 As someone who’s done some tire puncturing in his time, I’m here to tell you that to do this, you must make stealth your watchword, especially if you don’t want to startle the neighbors or your sleeping family.

Or maybe you find yourself in a situation where slashing a tire could save your life.

Whatever your motive is, whether the tire in question is yours or not, approach this business with as little noise as possible.

How to slash tires without making noise

(Are you trying to get even with someone who hurt you?) This being said, let’s get right into it. First, you need the following things:

You need a sharp object

Tires are made of tough material. They can actually be hard to puncture especially when they are pumped and under pressure, sitting under a car.

The load of the car adds to the pressure on the tire. You would need something of equal sharpness to match the resisting rubber.

I recommend a pocket knife with a strong handle. Also, make a serrated one. If a pocket knife is not available, go for an object with a long but sharp handle, perhaps a screwdriver with a sharpened mouth.

Also, make sure that the knife you use is not only sharp but also sturdy. If the knife is not strong enough it would bend on impact or even break off at the hilt.

You need a hand glove

You will need considerable force to puncture a tire. You’d be using both of your hands to do this; one hand to grip the handle and the other to drive the knife in from behind.

If you are trying to get back at someone who wronged you, you don’t want witnesses pointing you out at a police lineup.

You’ve got an excuse to have a mask on; Covid. So wear one, wear protective clothing too, like a big anorak, dark-colored to match the environment.

Also, pick a good time, midday perhaps, when most are at work, or late in the evening when the target tire is likely to be parked in the drive or garage, while the family is having a good time in front of the loud TV.

Now you are set with your tool – a sharp knife or a screwdriver. This is the best way to do it without making a noise:

If you are going to slash a tire, target the sidewall rather than the tread surface. The tread side of the tire is the toughest.

You could puncture the furrows between the tread blocks of course, but since the tire is likely still on the car, it is better to avoid that part.

Besides, the angle won’t be in your favor, the tire would be likely facing forward. The sidewall of the tire is not as hard.

Aim for the part close to the rim, the tire is considered weakest near this place.

Open the valve to let the air out a bit

This is another precaution. Remember you don’t want the puncturing action to cause a blast and give you away.

Open the valve, let out at least 30% of the air in the tire. Do this in a controlled way, slowly so the hissing sound is kept at a minimum.

When you have let out just enough air to allow a clean puncture, replace the valve.

Drive in the knife with one hit, and hold

Make sure you are still alone before this next step. Check the perimeter – remember, stealth is key in this operation. Be furtive, don’t fidget, act natural.

And if someone passing by sees you, say hello and let them go on their jolly way.

Now get back to work. Straddle the tire between your feet, go down, and drive the knife into the sidewall. Keep your face away from the point of impact in case the tire blows out.

You don’t want to land in the emergency room of a hospital with your wrists cuffed to the bed, a policeman waiting outside to take you in as soon as the doctors say you’re fine.

Tires hold a lot of pressure, and there may be debris from the burst which can cause injury to your eyes and face.

Don’t pull out immediately because there might be some hiss with the escaping air.

Pull the knife out slowly

Now pull the knife out slowly. When you do, the puncture should be too small to be seen. Put away your knife and walk away as casually as possible.

A further word on making the slash quiet:

You don’t want to be associated with the noise the tire makes when it bursts. You know what happens if you are caught.

So one more tip:

Before you make the cut with your knife get a piece of cloth, maybe a used piece of jacket you’ve trashed.

Hold the cloth around the handle of the knife as you bring the knife down hard on the sidewall of the tire.

You have to do both simultaneously as you make the cut: choke the slash with the cloth to muffle the hiss as the air escapes out of the tire.

A quieter way to slash a tire if you don’t care how you achieve making the tire unusable for the owner is by using a nail.

Get a brand new nail, one with a cap, and set it such that the nail’s sharp point is against the groove between the treads of the tire, and the cap sitting on the floor.

You could leave this nail either in one of the rear tires or the front, depending on which direction the vehicle is likely to go when the owner wants to move it.

When the car moves against the nail, it would be punctured. This method is more furtive, less vengeful.

But if slashing is what rocks your boat, then actually puncturing the tire with a knife is what you’d do.

How much force does it take to slash a tire?

It would take considerable force if you are a newbie and your knife is not sharp enough. If you don’t do it right you may end up hurting yourself.

Tires are manufactured using thick rubber in order for the tires to be durable and be able to withstand the rigors of use on the road.

Surely you don’t expect that your knife will stick in so easily, and with little effort. Imagine if all tires were that easy to burst.

Tires are assaulted all the time on the road by sharp objects like nails – even though nails can puncture them too; sharp edges on the curb, potholes, and hard protruding wood.

The sidewall of the tire is even more flexible and would resist the point of your knife if your knife is not sufficiently sharp.

You will need just one hard swoop directed at the sidewall to puncture and then begin to slash the tire.

Can you drive long on a slashed tire?

You can’t drive on a slashed tire. A slashed tire is either losing air or is flat already.

If you know anyone who’s driven on slashed tires, they have to be bonkers. And it doesn’t mean you should. If your tire has been slashed overnight or while you aren’t looking, don’t try to drive on it.

If the tire is still standing and is not flat yet, then check the extent of the damage.

If the tire is leaking air you should hear it. But if you have to get away fast and the tire is still inflated, then you can drive with the tire for about five miles.

Note that the more you drive, the faster the tire loses air.

Achieving a quiet slash is not difficult. All you need is guts, very sharp objects, sufficient strength to drive the knife in, and a cloth to muffle the sound. Then as soon as the deed is done, hightail it.