Yes, you can jack your car up anywhere on the axle of your car. The axle is designed to transmit torque to the wheels, maintain the corresponding position of each wheel in relation to each other and the car.

The axle bears the weight of the car on both ends of the car, front and back. If you need to do repairs or change any of your tires, the front or the back axle are choice places to jack your car up on.

Make sure to apply safety precautions when jacking your car.

How do you jack your car on the axle?

One important reason why you would need to jack up your car is that you need to replace or patch your tire.

It is impossible to do this while your car is sitting heavily on the tires. Accessory manufacturers have not left car owners with their devices, there is a whole range of tools to achieve your goal in the minimum time and with little stress.

You already know where the axle is on your car. It is a contraption of metal that connects the tires together in front and rear of the car.

Steps to jack up your car by the axle

Safety precautions when jacking up your car at the axle 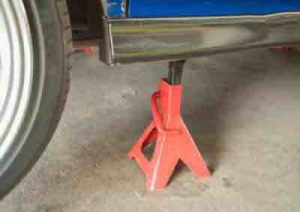 It is important to follow safety precautions. The following precautions help you avoid injuries and accidents as you work on your car.

Where should you not jack up a car?

Every vehicle comes with a manual that shows you the point where you can jack up your car. It is important to always follow the instructions therein.

You should not jack your car at any point not specified by the manufacturer of the car.

Can I jack up my car on differential?

No, you shouldn’t. In other words, you can, it’s your car, isn’t it? You have probably seen someone do this.

People do a lot of stuff with their cars and get away with it. That does not mean you have to do same thing though.

The differential is referred to the system of gears that makes it possible for the wheels which the engine powers on the same axle to rotate at different speeds.

Another risk of jacking on the differential is you might end up crushing a brake line.

You’ll succeed in creating more problems. You could attempt jacking up right under the pumpkin but only if you use axle stands on both sides of the car and withdraw the jack immediately.

Don’t put the jack under the following places:

The engine is encased in the middle of the subframe. It is risky to place your jack under the engine because you risk breaking or dislodging a component.

Most cars have plastic undertray. You find them around the edge of the frame rails, around the back and front of the car.

They are not difficult to miss. Jacking under any such undertray is extremely risky.

For one thing, you have a false balance with the undertray, the grip either breaks or slips off, damaging your car and possibly causing injury to you too.

Is it possible for you to jack up a car on its subframe?

No. This is a risky thing to do to your car. The subframe may bend if you try to jack up under it.

One of the reasons this may happen is if the prong on your jack is small. A small prong has only a small surface area to cover as it bears the load of the car.

You may have heard some vehicle owners say they jack up their cars on the subframe. Don’t take their word for the whole thing. Folks usually don’t provide all the facts.

They may have gotten away with jacking on their car’s subframe because the prong on their jack is a flat, plastic-type, and they may have positioned it in the center of the subframe.

But even then, it is a risk you do not want to take with your car.

Can you put jack stands on control arms?

Jacking up at the control arm is risky. You may end up breaking or bending something down there.

However, the risk can be reduced if you place some soft padded material between the jack and the metal of the control arm. Doing this reduces the risk of a slip, forming a firm grip on the metal.

Another way to avoid damage or breaking the control arm is to lift from below the ball joint close to the wheel or under the spring. But do this only if you are not doing anything around that spot.

The important thing when jacking up around the part of your car is to avoid any weak points or spots where there’s likely to be a break or crack.

Can you jack up on frame rails?

Most cars have tough frame rails, so yes, you can jack up the car’s frame rail. Just be certain you are jacking up on the frame rail and not the unibody.

The frame rail is typically constructed using steel channel sections, so they are sturdy, strong enough to bear the weight of the car on a jack.

An important piece of advice is to always remove the jack once you have your stands in place, and that you do this on a flat surface to minimize risks.

Can you jack a truck up on the frame?

Yes, you can jack up the frame. Just make sure you’re using a jack that is a corresponding tonnage for your truck.

Also, follow the manufacturer’s instructions for your truck.  Make sure too that the jack has enough travel to carry the truck all the way up for there to be space for your work.

Once the truck is up on the jack, place two jack stands on either side of the frame of the truck for maximum stability.

Absolutely do not rely on the jack alone to work, take it out immediately you are sure the jack stands are in their proper places.

Can you jack a car up in the middle?

Jacking your car up in the middle is one very risky thing to do. Firstly, there is a risk of the car flipping over on account of the imbalanced distribution of weight. Secondly, the jack may cause a dent in the frame rail if it runs across the underside of the car there.

So no, it is not advised to jack your car in the middle. It is recommended that you stick with using the jacking points on the car.

You must bear in mind that your car is not designed to be jacked from every conceivable point.

Your manual shows those points where it is safe to jack your car, and none of it usually includes the middle. 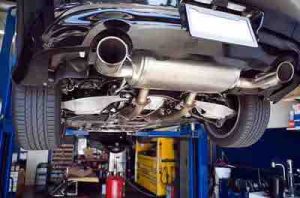 Most small cars the size of sedans can be jacked on one side by a 2-ton jack since it is required that the jack be rated for at least three-quarters of the car’s entire weight.

If your vehicle is a pickup or a truck, you’d require a 6-ton jack. You don’t necessarily require a jack that is rated for the total weight of your car.

So, for your small to midsize car, a two-ton jack is ideal. Follow the safety precautions that require that you remove the jack after the car is lifted and stands have been installed.

Remember that you are only lifting one side of the truck, not the entire vehicle. Always practice safe jacking by never getting under the car or truck while it’s on a jack. If possible, use jack stands, then pull off your jack.